Time With A New Subsurface Legend: The Sangin Instruments Neptune

Every item in our everyday carry serves a distinct purpose, from cutting to illuminating, communicating, or hauling. Of all the items we carry, a watch has the ability to dictate our future, document our past, and help us maximize the present while holding a unique distinction of being gear, tech, and a show of taste, all at the same time. In a world where time is arguably one of our most valuable assets,a watch can be one of the most instrumental items we carry on a daily basis.

A watch, especially a mechanical watch, is a true engineering feat that still contains technology elements developed in the 1500’s. Over 130 components make up the average mechanical watch. 130 components carefully pieced, lego-epic, level into a footprint the size of a poker chip.We then use it and abuse it on a daily basis. Meanwhile all those 130 components continue to work harmoniously together to keep accurate time and date, despite being with us for every bump, snag, or whack along the way. It is truly fascinating when you really dive into the demands of what a modern mechanical watch can take and deliver back.

This is where the Sangin Instruments Neptune comes in. 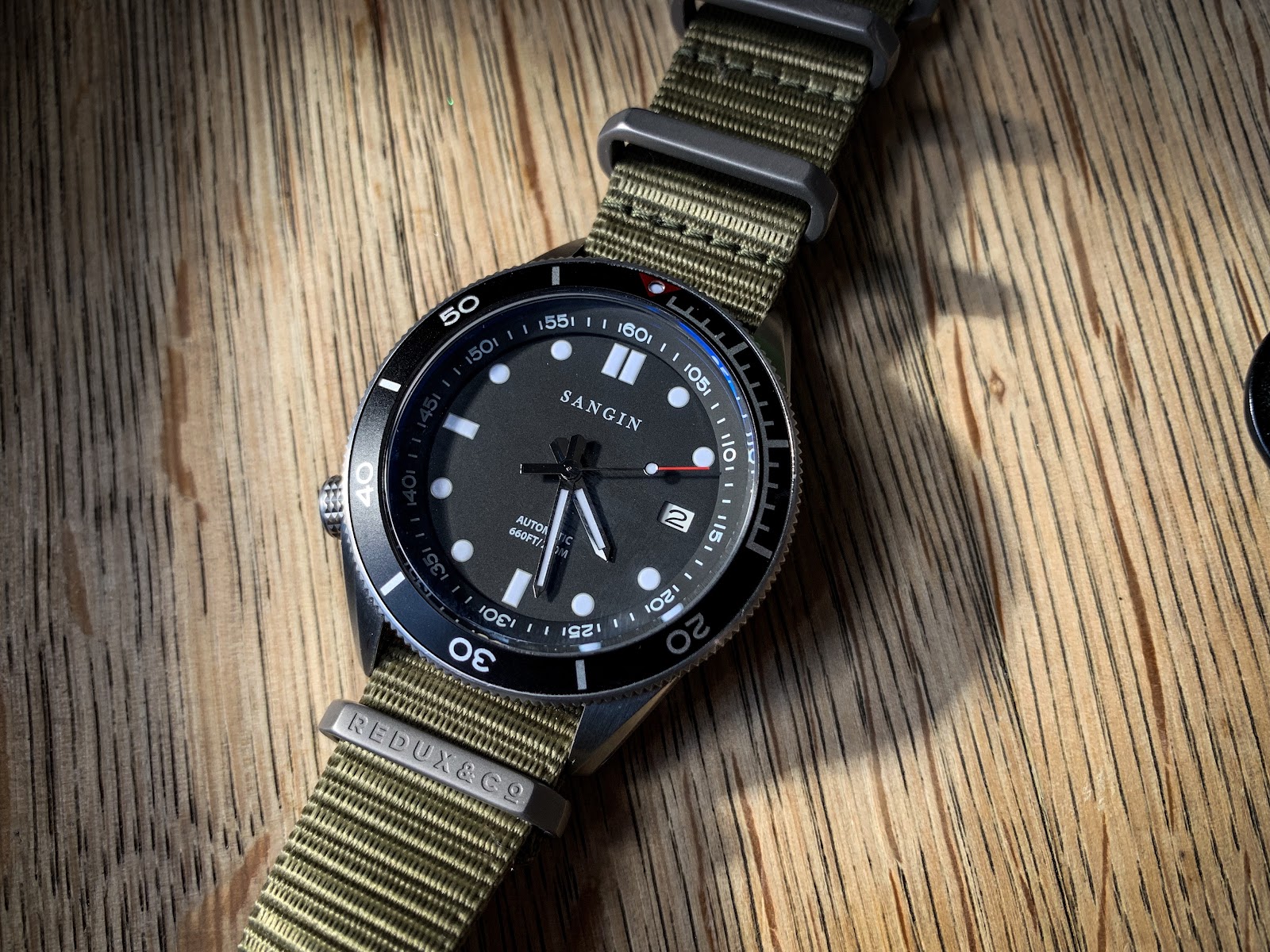 Founded by a member of the Special Operations community, Sangin Instruments’ timepieces were forged from the need to have a timepiece that could handle the rigors of harsh field use (combat), but look sophisticated on wrist while attending suit and tie briefs in an embassy or more formal setting. A watch that has to function at a high level, look good, but not draw too much attention.

The Neptune is Sangin Instruments’ third watch design. It took over 2 years of design and development and over 300,000 man hours involving 60 veterans, active duty service members and scientists from MIT and Woods Hole Oceanographic Institute. The Neptune exceeds ISO 6425 standards, officially earning the title of ‘Dive Watch.’ Needless to say, it has the credentials and backstory to compete with other well-known, established watch manufacturers in the market. 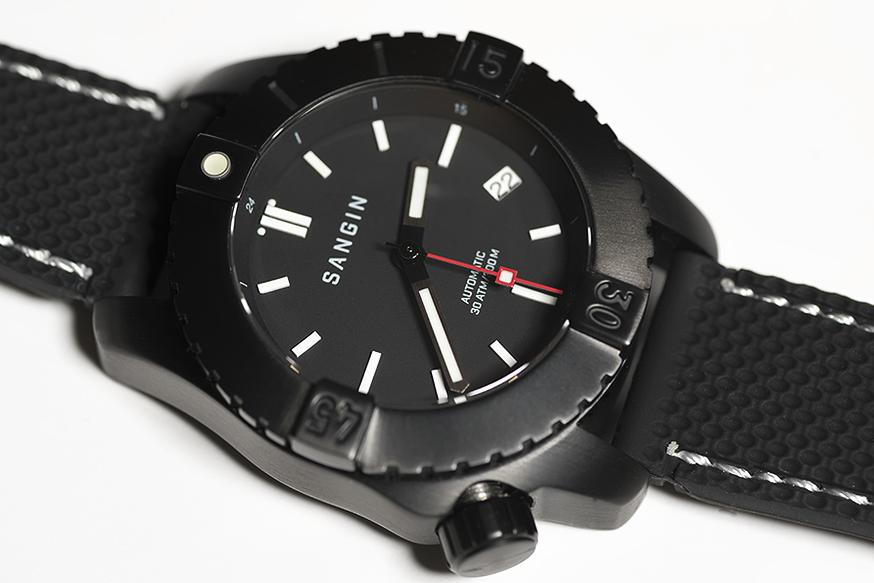 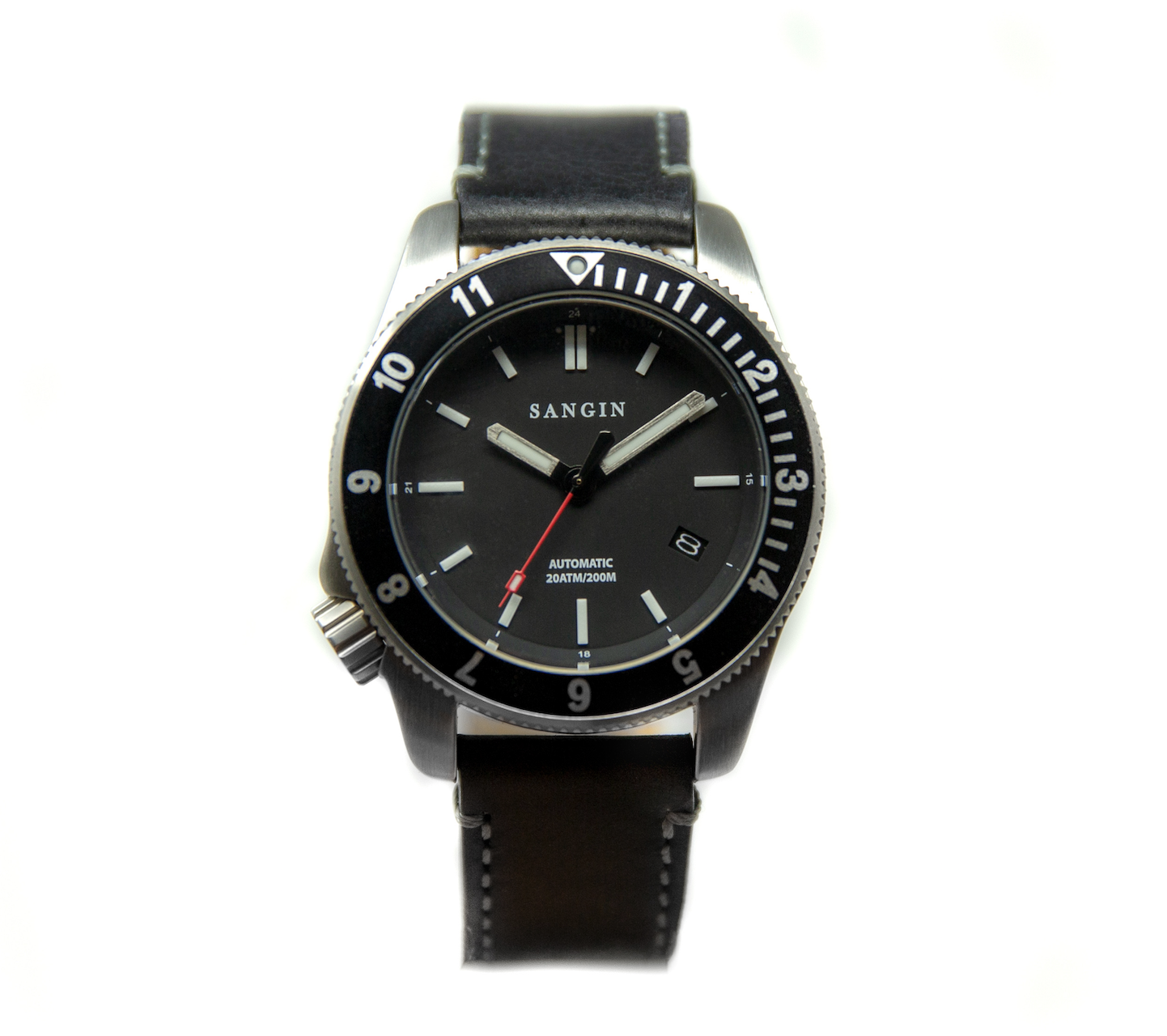 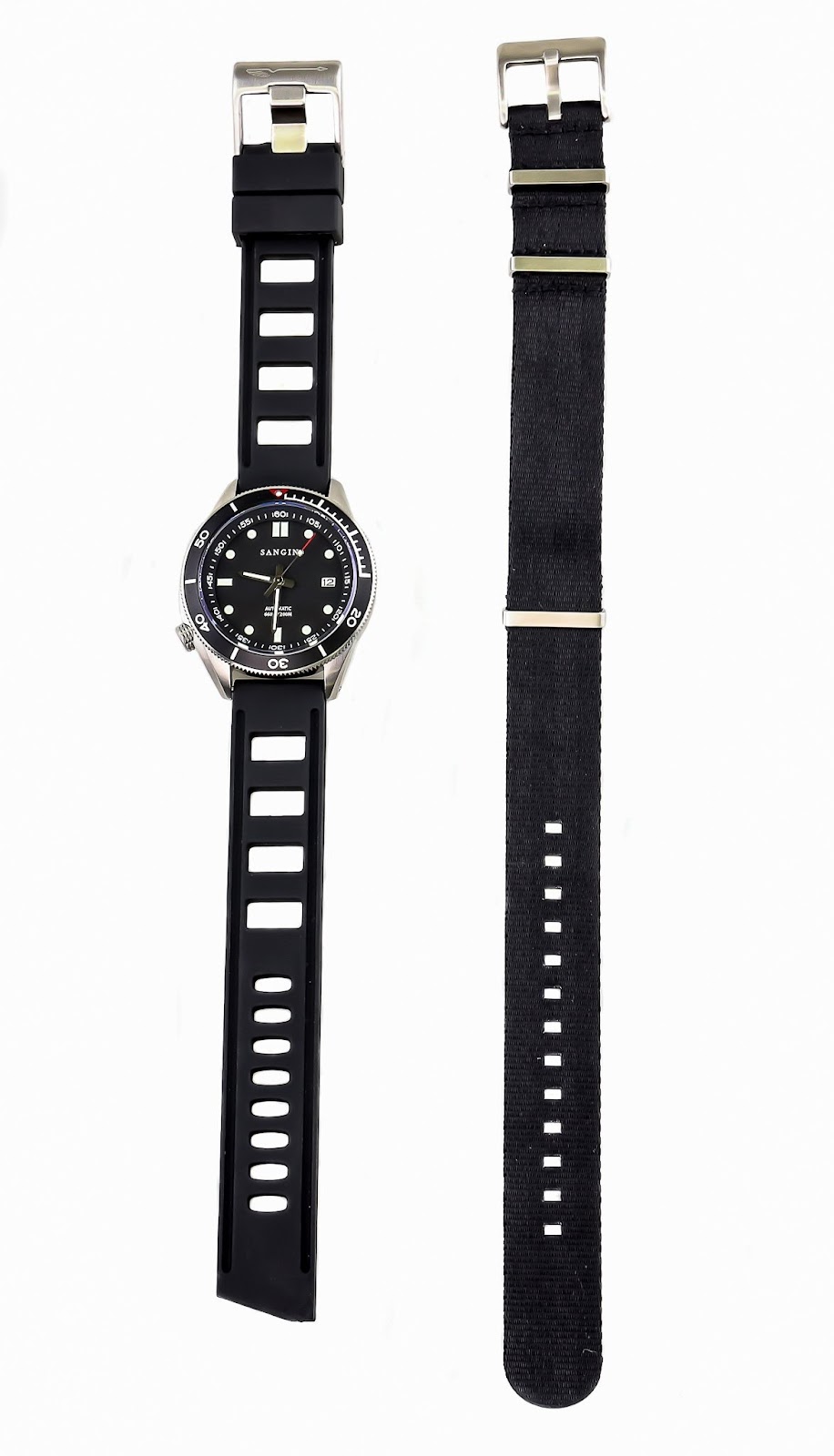 So, why does any of this matter? Why the Neptune? And why Sangin Instruments?

After spending 90 days with the Neptune on wrist while diving, mountaineering, spelunking, and yes, the typical urban office meetings, here is why the Neptune, and Sangin Instruments, should be on your everyday carry wishlist.

The Neptune’s black unidirectional bezel against the black dial and brushed finish case styles well with virtually any attire, from casual to business professional. 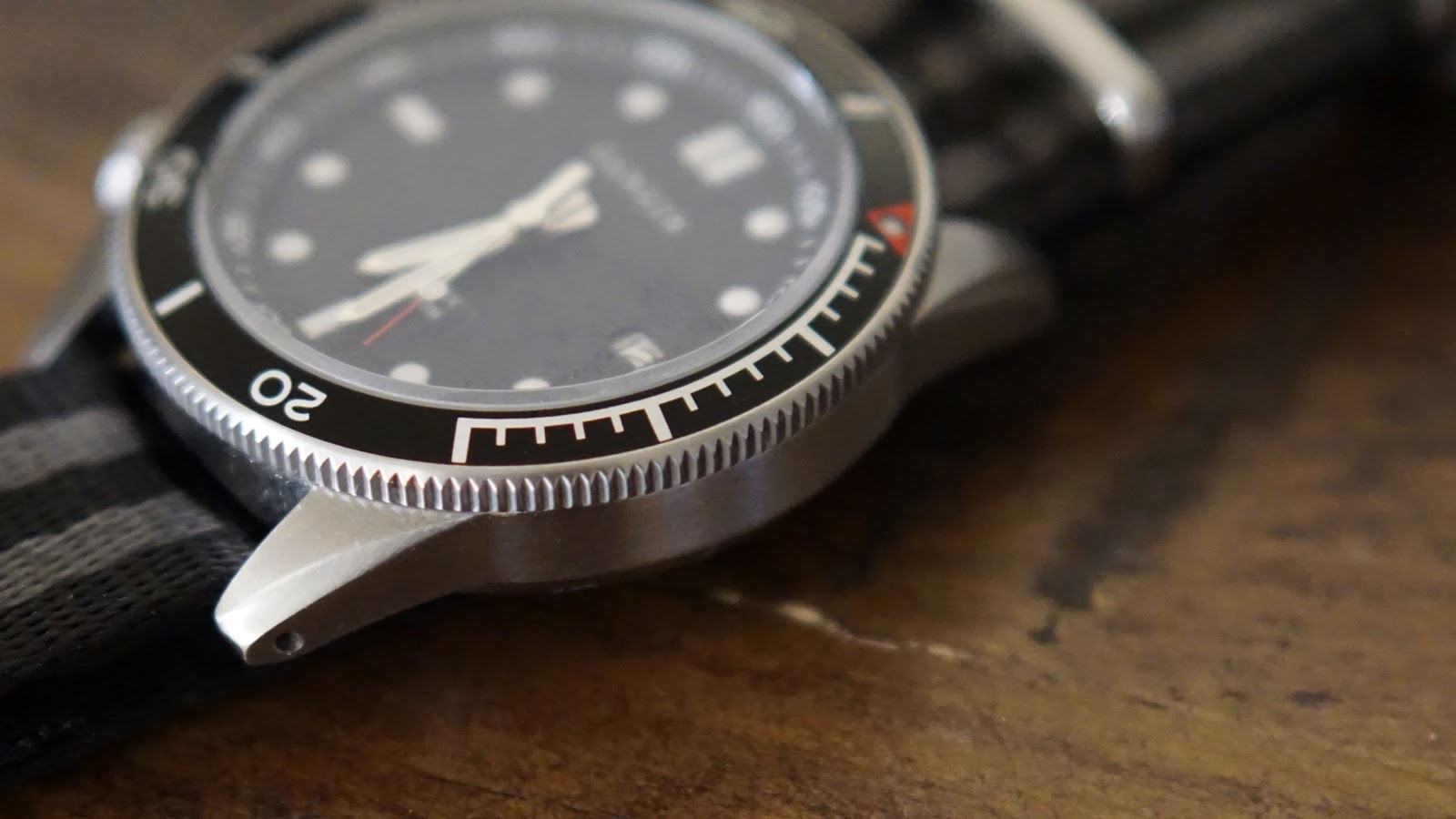 The 40mm case width means the watch sits well on almost every wrist, from big to small, thick to thin. 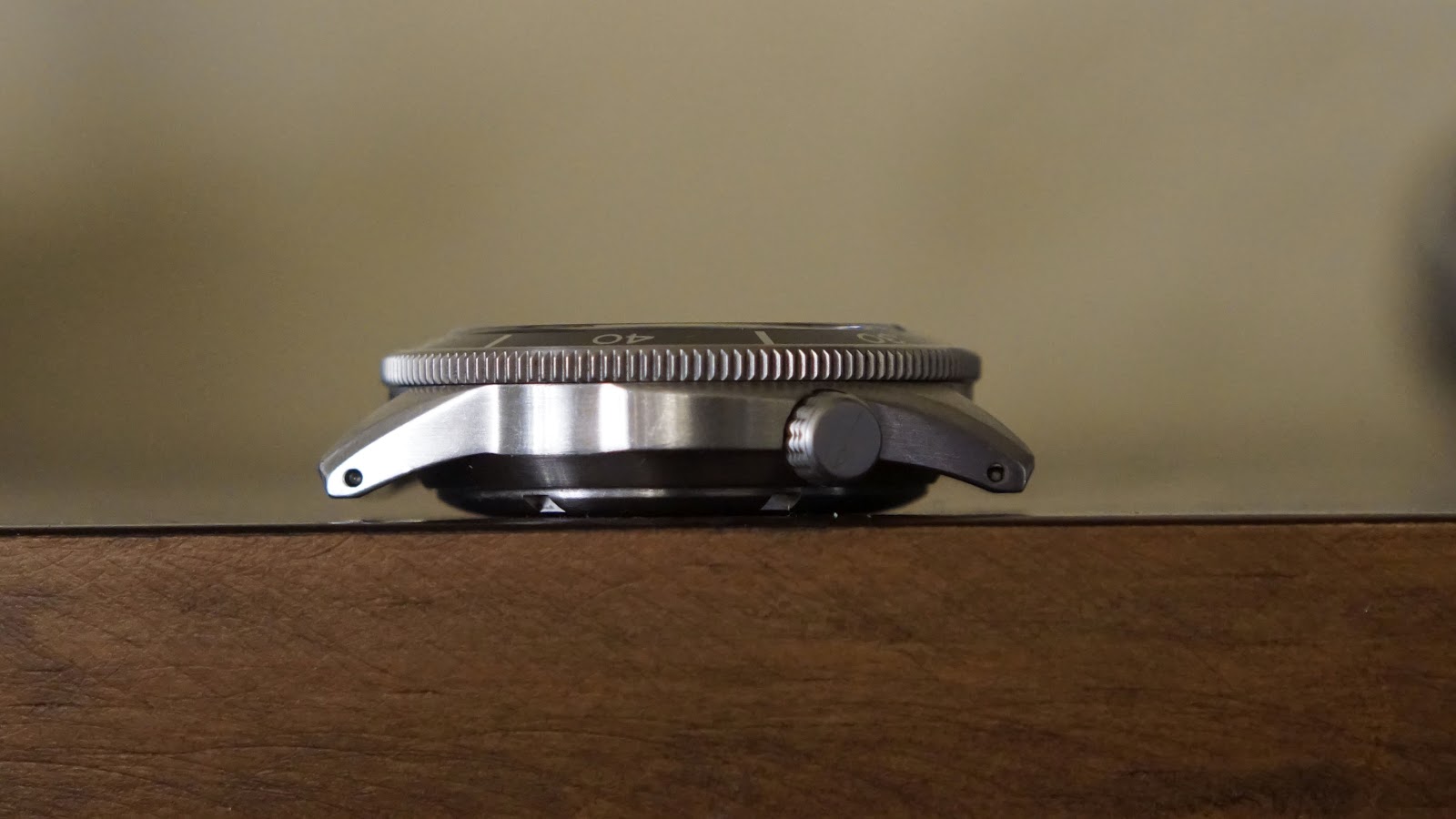 At a lug width of 20mm your options for styling the Neptune with a strap or bracelet are endless. Dress it up for that dinner date with a bracelet or dress it down for the afternoon run with a rubber strap.

The brushed stainless steel case adds a bit of class to the watch. Elevating its presence with a consistent sheen that reflects the build quality and elegant curves of the case. 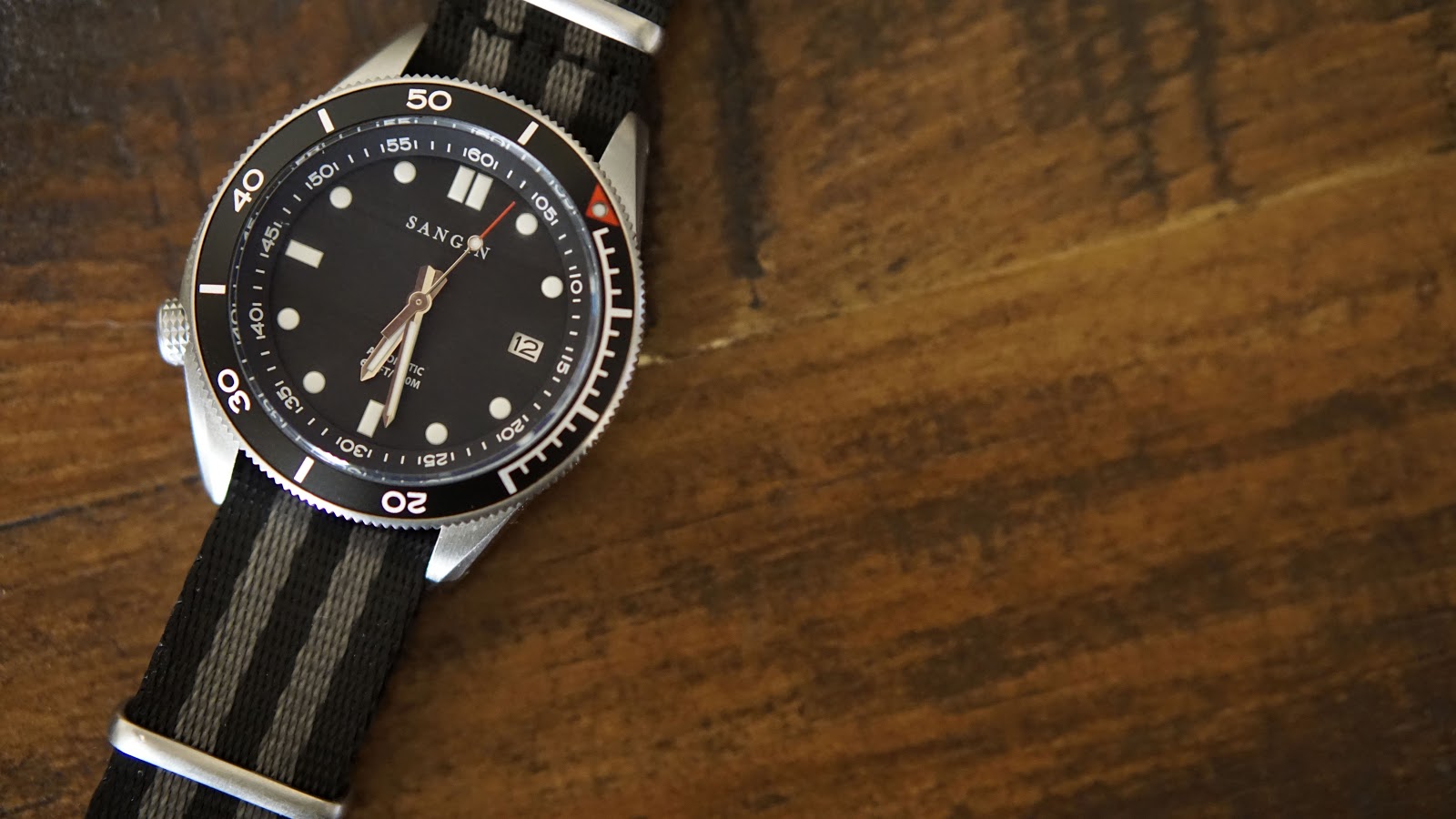 Finally, a case thickness of 13.2mm helps the Neptune sit at a comfortable height on the wrist, not interfering with those sport coat cuffs. 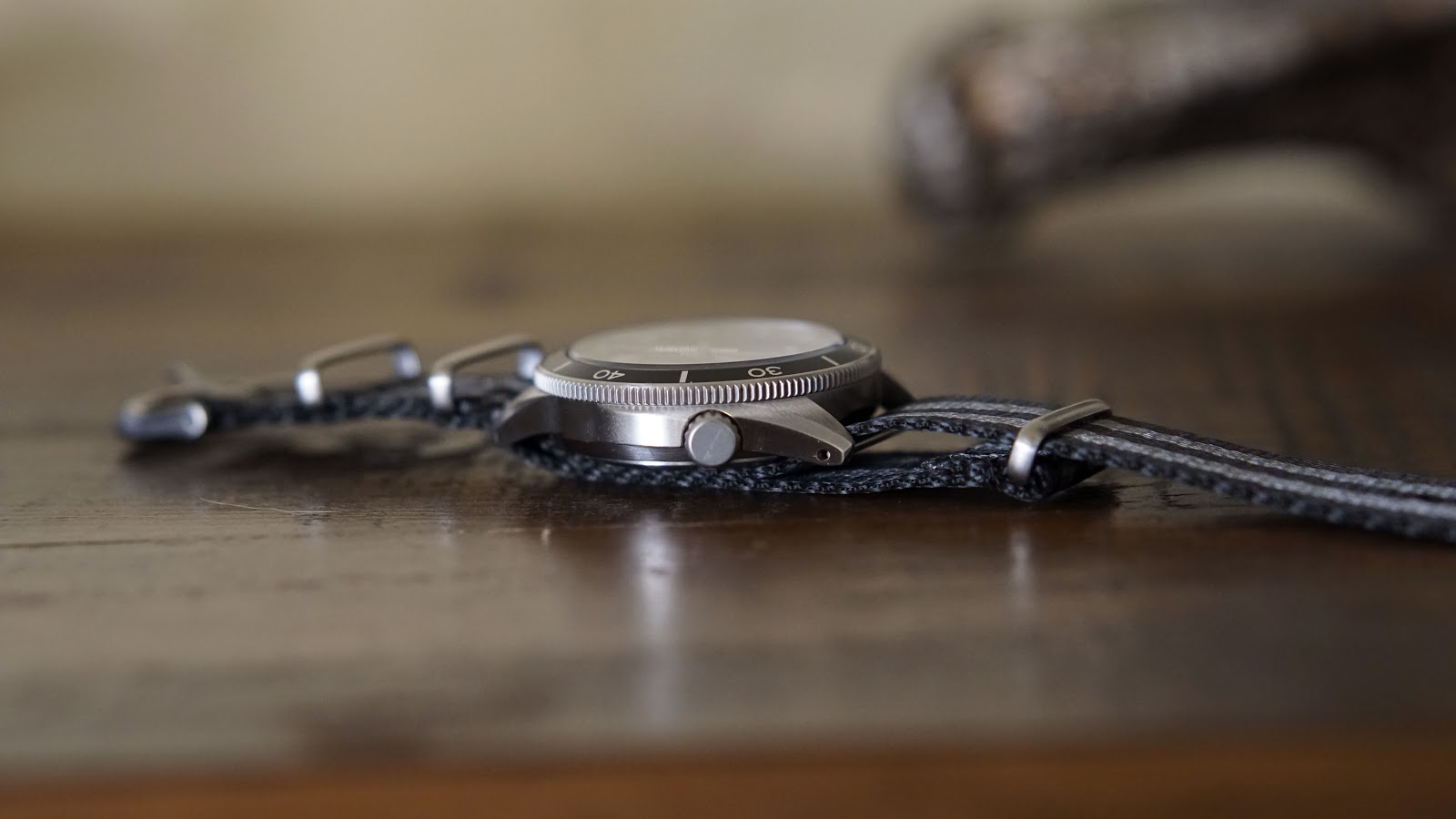 The Neptune just wears easy. It can live comfortably under a cuff all day or exposed for the fellow watch enthusiast to eyeball with no effort or thought from the wearer. It does add an element of ‘sportiness’ to the wearer’s style without being too obtrusive. For those that this watch draws attention from, this is a plus. It speaks to those ‘in the know’, but says nothing to the passerby or surveyor casing your valuables. Wearing one is like being a member of a secret, international fraternity of capable individuals. All that is missing is a secret handshake. When in reality all you’ll get is a nod and a “nice watch, brother” from another aficionado. 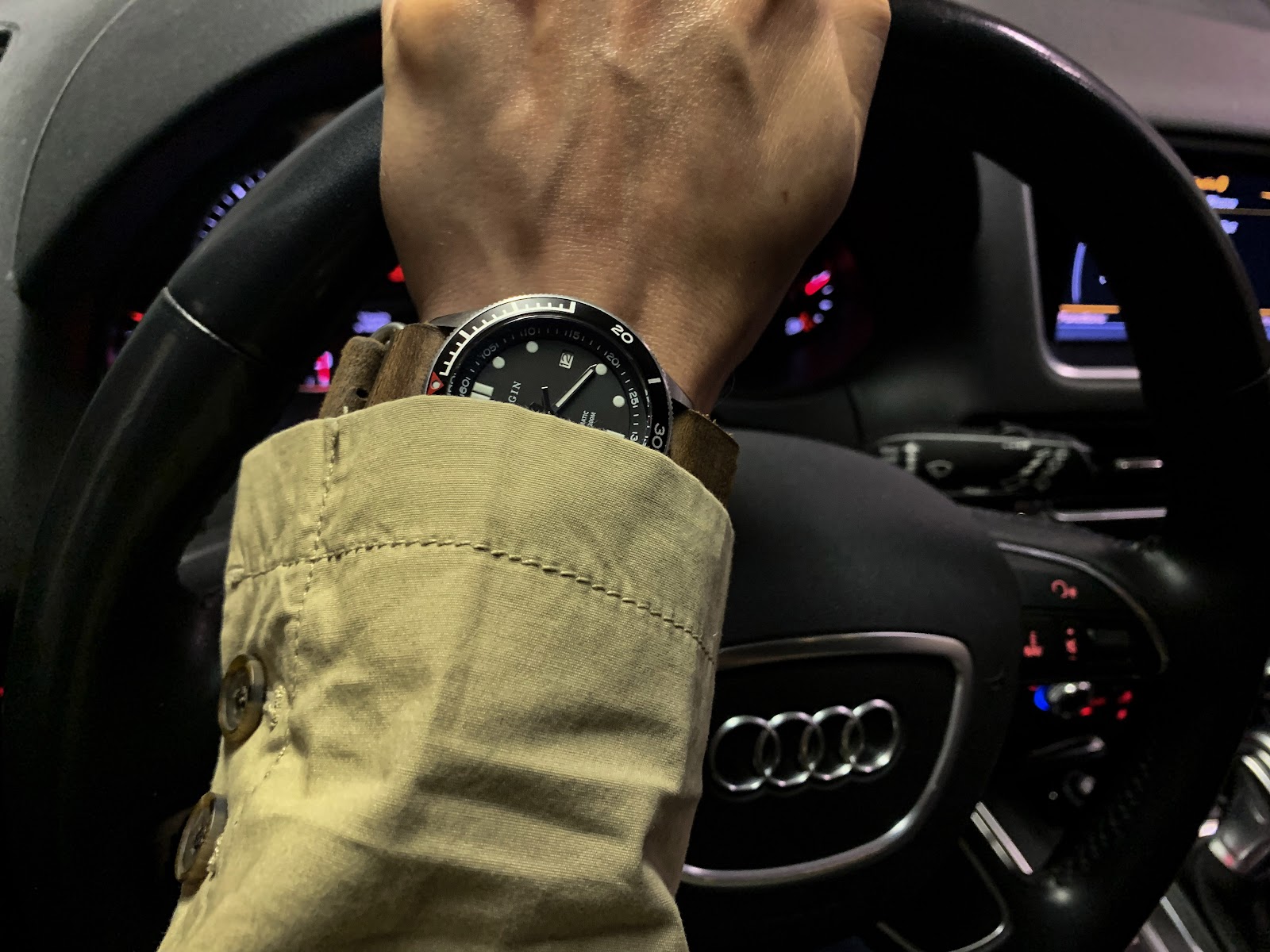 The Neptune’s 120 click unidirectional bezel is extremely fluid. Some may deem it too easy to bump out of a designated position due to its ease of rotating, which is valid. However, Sangin designed the bezel to rotate fluidly to aid in its usability when in adverse activities, such as diving. It’s extremely easy to use even with the thickest of gloves on. The counter to this design would have been to make the bezel have a more defined and harder click on rotation, but then would have required the bezel to have larger teeth to ensure a solid purchase. This would have altered the overall appearance of the watch altogether. The fluid rotation is a fair trade-off in this writer’s opinion. 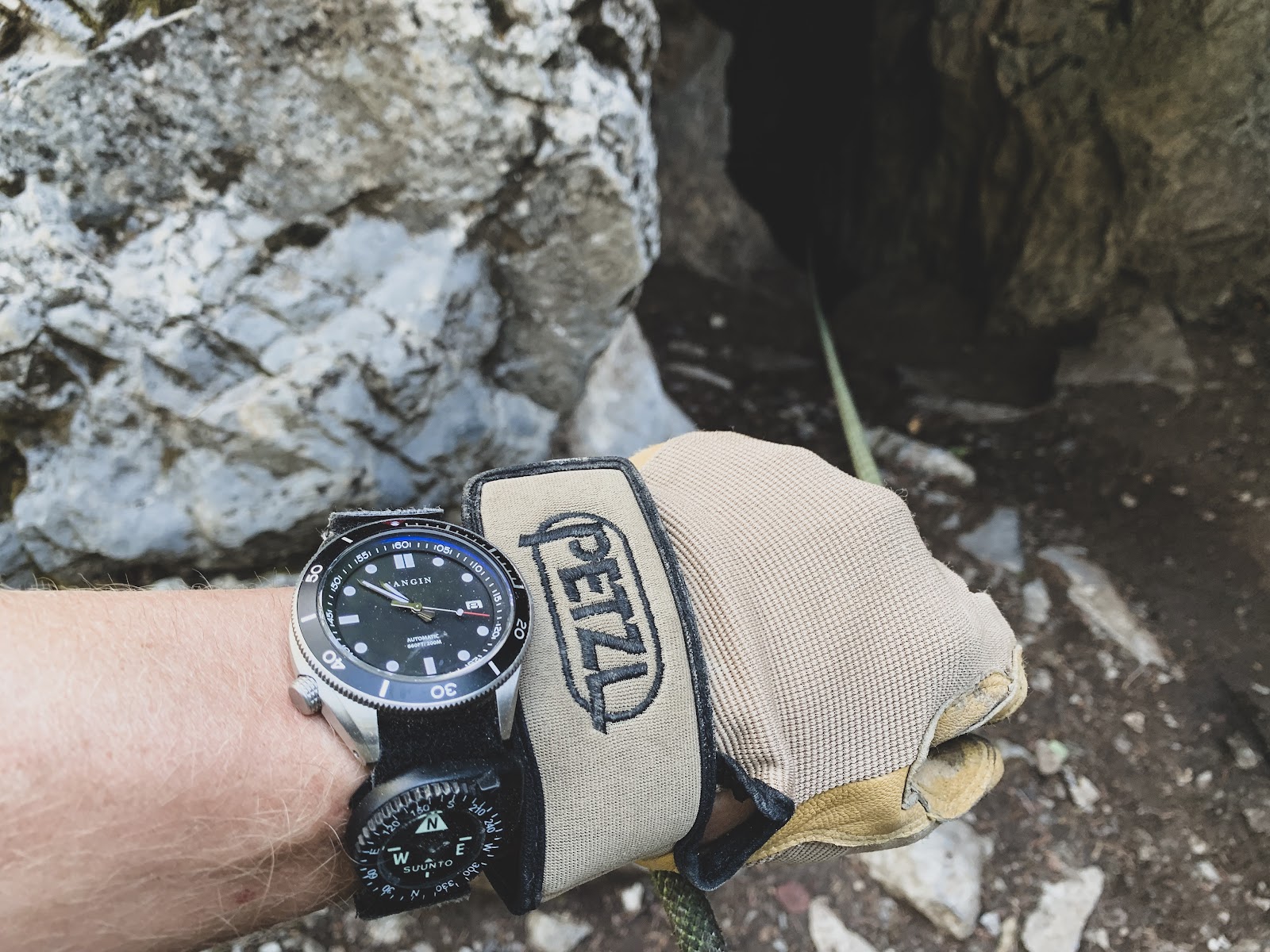 The lume is a SuperLumiNova BGW9. In short, it’s not too bright, nor too soft. It reads clearly and prominently in complete darkness subaquatic and subterranean. The same can be said simply moving from direct sunlight to a more shadowed environment. The hands and indices are easy to identify day or night, low light or direct light. 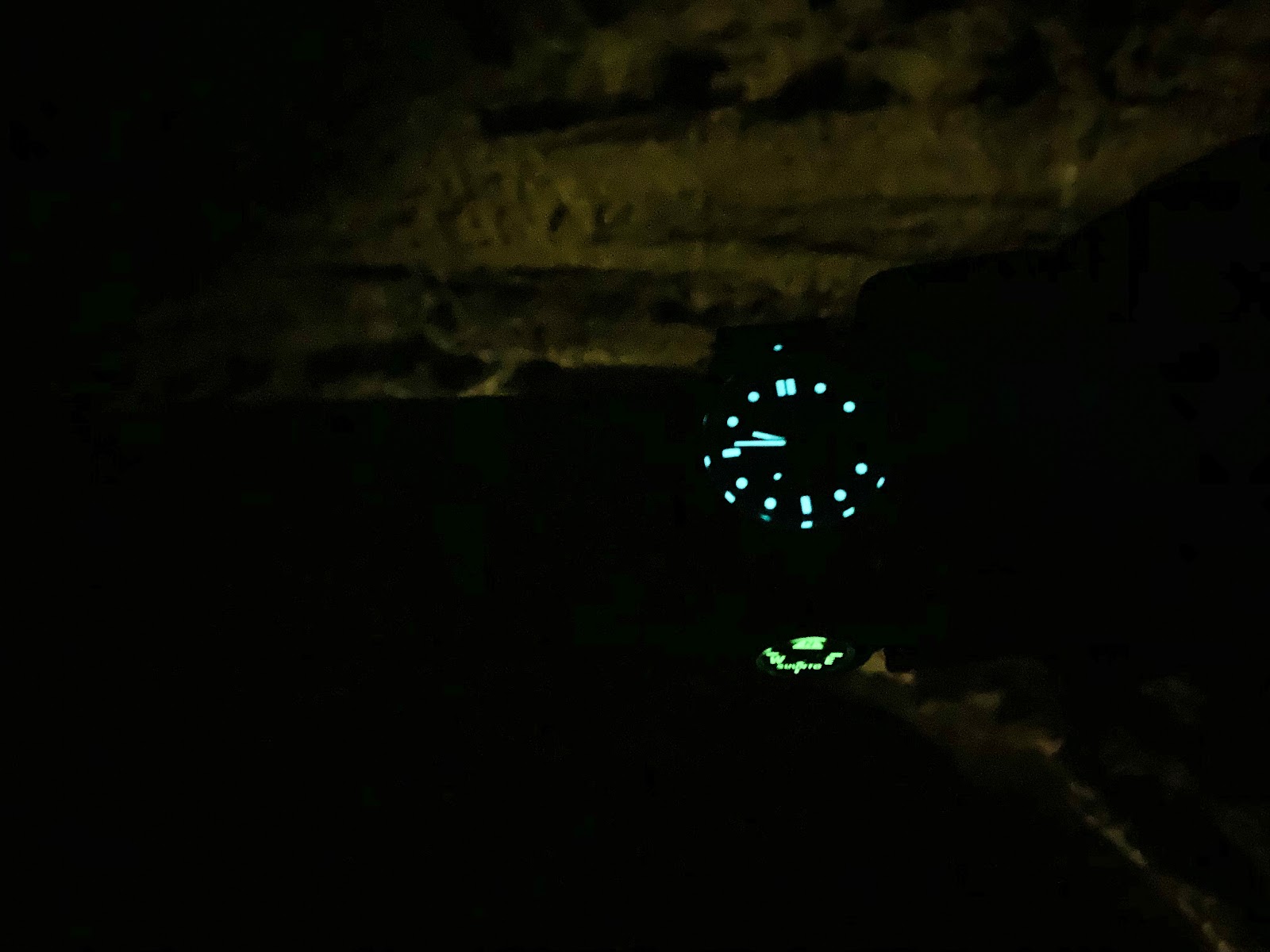 The ISO 6425 certification gives the Neptune official dive watch claim to anti-magnetic to 4800 Amp and shock resistant (calibrated in three positions). In my experience thus far with the timepiece, I have yet to identify any specific hard field use, that the average user would partake in, that would affect the timepiece’s accuracy at all. In conversations with the owner of Sangin Instruments, he has shared stories of Neptune users putting much harder use on the watch than most can in a lifetime. Stories like being vibrated to astounding levels while the wearer unloads a vehicle mounted .50 cal. That particular watch, having seen consistent vibrations and shock that can only be experienced in combat, only lost its accuracy by a few tenths of a second when inspected by Sangin Instruments engineers. 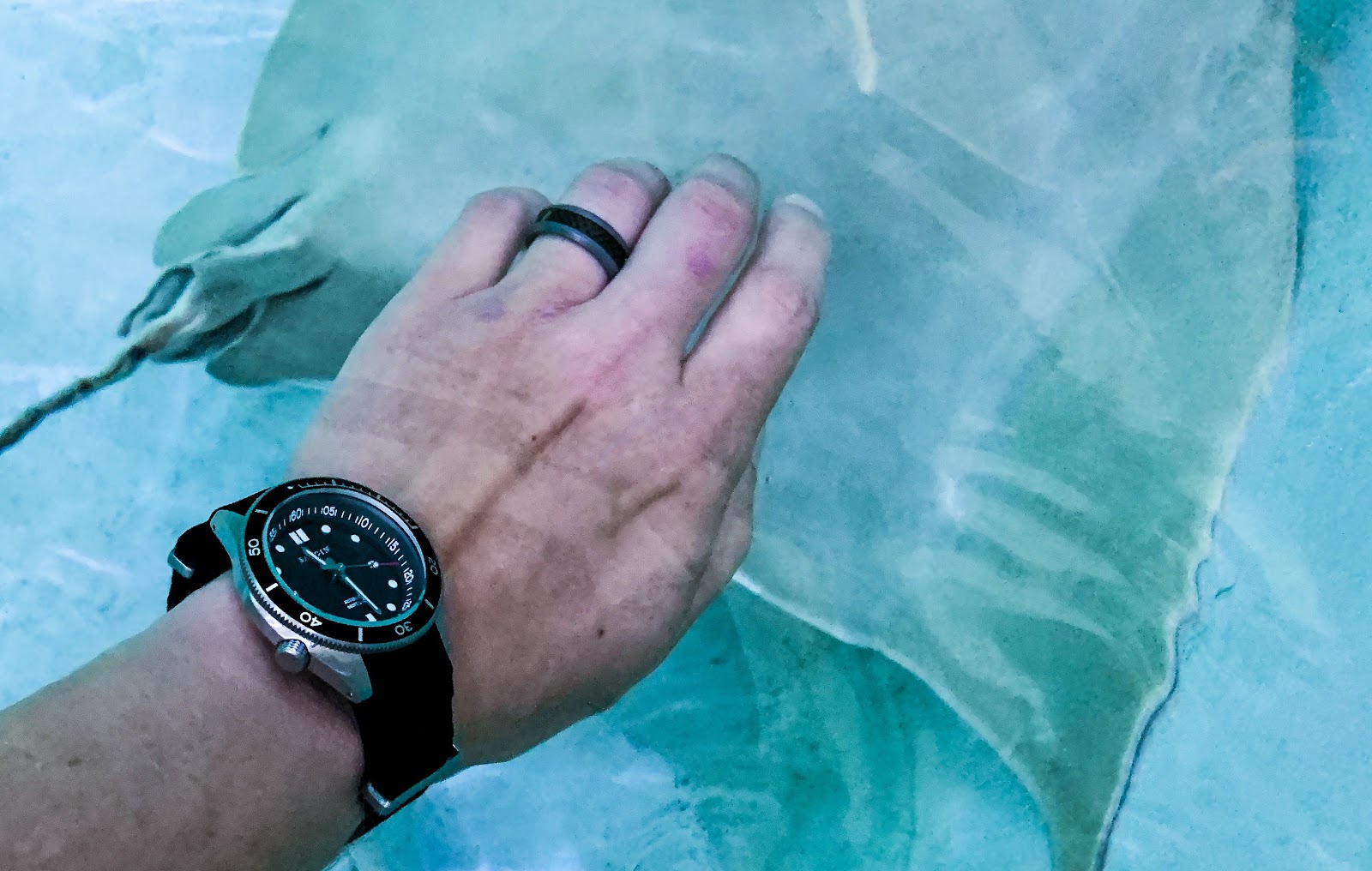 A visually striking part of the Neptune is the 8 o’clock position of the screw down crown. While considered a bit unorthodox by some, just like the bezel, it has a very distinct and clear purpose. In physical movements that the target consumer might find themselves in, such as pushing or gripping for extended periods of time, where the wrist is bent upward into the watch, having a crown at the 2, 3, or 4 o’clock positions (typical in most watches) would press into the top of the wearer’s hand. Through extensive time in the field using other watches, Sangin recognized this repeated discomfort and aimed to rectify it with the 8 o’clock crown position. This, again, aids in the Neptune’s ability to wear so easily, no matter the activity. Unorthodox and a bit awkward to adjust the time (I recommend off wrist), but purposeful and well thought out.

Lastly, the 316L stainless steel is extremely robust and tough. The second most used type of steel in the world, 316L is known for its corrosion resistance and is commonly seen used in medical devices, marine applications, or seaside architecture. It’s made to tackle abuse, more specifically, aquatic abuse. This choice in steel further speaks to the Neptune’s ability to be a true dive watch in every sense of the phrase.

Needless to say, and to no surprise, the Neptune has a tremendous amount of thought and design behind its ability to be a tool as much as it does to be a simple timepiece.

My Neptune has been on wrist mountaineering, free diving, and seen countless conference calls and daily commute hours (exciting, I know). It even aided in logging my time on a recent spelunking trip. It’s taken direct hits and been thrown into a duffel among other hard tools. It’s had an adventurous and fulfilling 90 days on wrist. While I am not officially trying to take it to its limits (which given its limits would be one hell of a campfire story), I have tried to not baby the watch. Just to simply use as it was intended: Everyday, all day, no matter what the day entails. 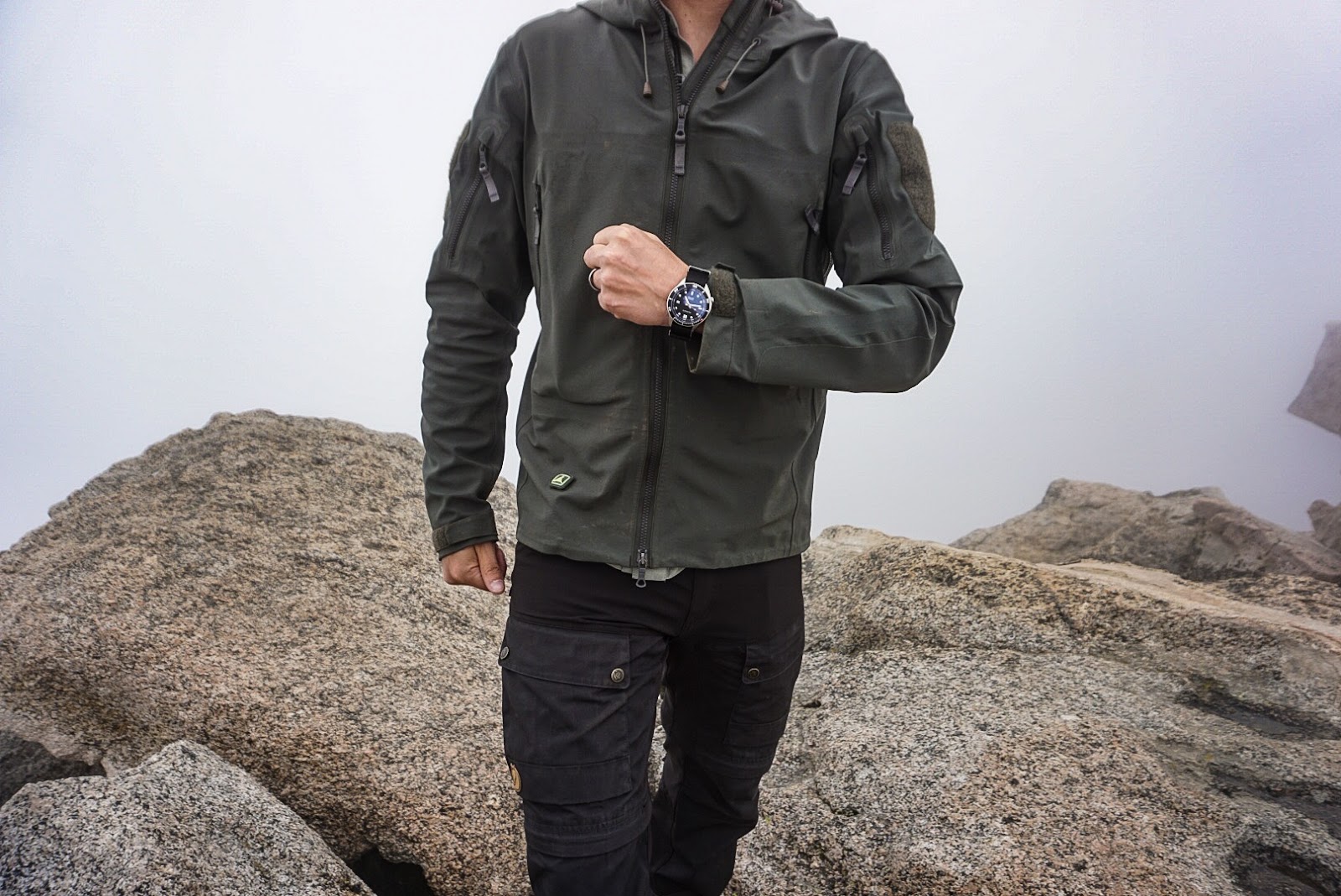 I’ve enjoyed wearing it. Recently I’ve added it into my usual rotation among my other watches and find that I look forward to the Neptune’s turn. It’s become my go-to for the foreseeable future for any and all in-field adventures. It’s a great watch for what and whom it was designed for. With this, however, comes a caveat. They are extremely hard to get. In a way, adding to its allure. Sangin Instruments only does a few runs a year. They send communication to their newsletter subscribers announcing the release date and time. The rest is up to you. When they restock, they are gone in minutes. So ownership really does act as a membership card into that unspoken group mentioned earlier.